In 1968, a budding New York City entrepreneur who provided immigrants with jobs takes a Florida vacation with his family. Meanwhile, his relative, an employee, is murdered on Long Island.

Upon returning to New York, Sam Sommer learns the fate of his wife’s uncle, Irving Silver, when he doesn’t show up to carpool to work. Three days pass with no clues about his death. Then a recent contractor at Sam’s deli sets up a meeting to share news on the investigation.

Within moments after pulling into a donut shop parking lot to meet, Sam is kidnapped by detectives with the engine still running. While held in custody, he is beaten and allegedly confesses to the murder.

Court proceedings amount to do-overs, appellate victories and overturns, and mysterious documents. Sam is found guilty of murder in 1971. Within short order, his case is highlighted in college law courses. 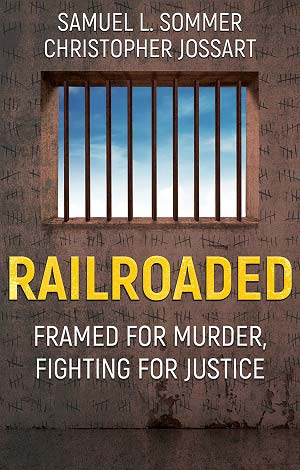 After surviving years of power-hungry guards and moving often from prison to prison for good behavior, Sam is released on parole in 1991. Justice continued to railroad him until 2015 when he finds an eerie document in the police archives that proves his innocence. That discovery triggered the re-opening of his case. What will a momentous turn of events bring next?

The Story of Sam Sommer

Here’s a Snapshot of What Others are Saying about Railroaded:

This is an ace of a read that shows what can go wrong in America if you happen to belong to the wrong religion, and/or live where the wrong people have access to you. The Sommer family was happy and doing well when apparently the wrong people took notice. Sam Sommer enjoyed helping others, whether through his businesses or personally. He was happily married and raising a very large family, a seventh child due very soon. For no apparent reason, he was targeted and railroaded, other than someone in power wanting him out of the way, and not liking his success. It seems impossible, even in the late ’60s and early ’70s for this to happen so easily, but this was a corrupt county in New York.

This book tells how it happened, how Sommer and lawyers fought it and won the first round. Were overturned and lost. He was sent off to prison and had to fight for justice all over again. Years of battling while his wife was left to fend for seven children. It’s an amazing story that I recommend highly for those who enjoy true crime, memoirs, criminal law, it covers a lot of areas. It’s aggravating and inspirational all at once, and frightening that these things go on. My thanks for the advance electronic review copy that was provided by NetGalley, authors Samuel L. Sommer & Christopher Jossart, and WildBlue Press.

First I have to say, I love the author’s style of writing!! A very unique and effective writing style. The injustice done to Sam and his family infuriates me. It also scares me that something like this can happen. I couldn’t put the book down after I read the introduction. Sam’s story needs to be told, Sam and his family deserve to have the wrong righted. I would anticipate seeing this on the big screen in the future, yes a future movie!! A must read for sure!!!

This is one of the best true crime books I have ever read. From the moment I started to read this I could not put it down. It is a must read for anyone who is interested in true crime. My heart breaks for this man and his family – that they are still going through this. This would be a GREAT Netflix show.

Get Railroaded: Framed for Murder, Fighting for Justice Online Now!

Find the Book on WildBlue Press