Christopher Jossart is the recipient of the 2019 Communicator of the Year award from the National Council for Marketing & Public Relations, District 3 – accepted on the top floor of the Hyatt Regency in downtown Milwaukee before national colleagues. 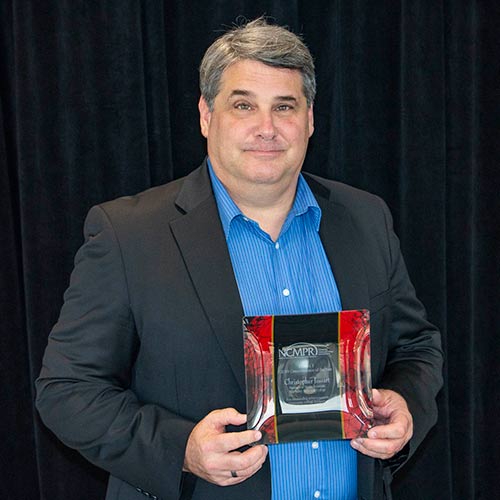 Check out Chris at the 12th Annual Fox Cities Book Festival! His storyteller session, Living Inside a Hate Crime, will be held on Monday, October 7, from 11:30 – 12:30 at the Gerald H. Van Hoof Memorial Library in Little Chute. MORE INFO >>>

Based on the book’s success and national media attention, WildBlue Press is now offering Railroaded as an audio read! Learn more HERE >>>

USA Today Network runs Q & A piece on uniqueness of this story. 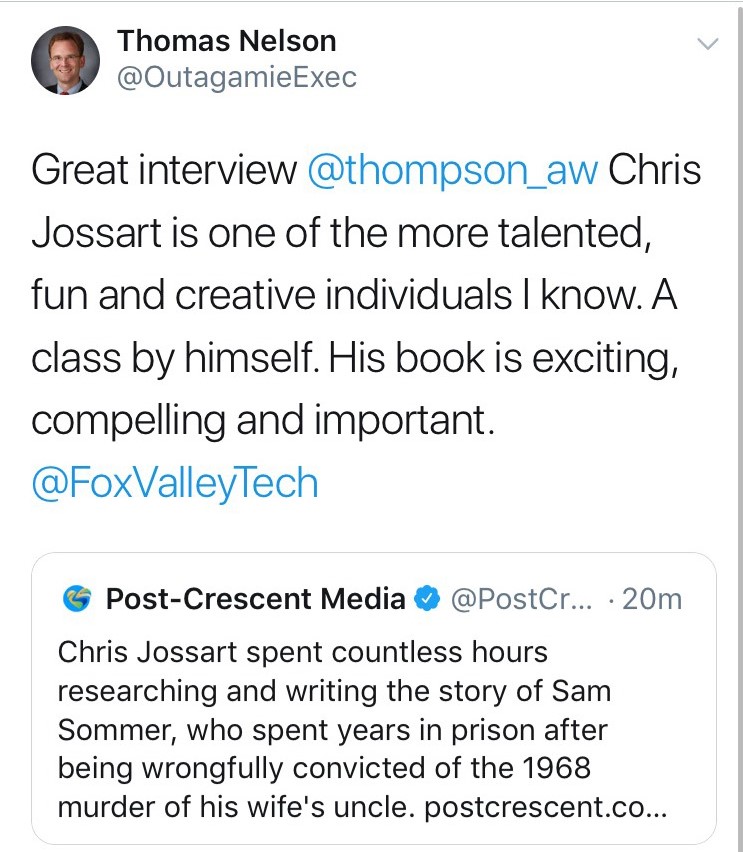 Railroaded soon to be an audio book!

Based on early success of the book and Kindle sales, the popular nonfiction read is going audio. Watch for updates on where to buy.

Chris joined Josh Dukelow on WHBY’s Fresh Take for a closer look at his new book, Railroaded, which debuted at number eight in the nation during its first week of release in True Crime/Mystery! LISTEN HERE >>>

The company station wagon was found still running with driver’s-side door ajar. A huge dog barked wildly in the back seat, foaming up a lather of foul play. Barely inside the parking lot of a frequently-traveled donut shop in Commack, Long Island, the car presented a haunting prelude to injustice.

Little did family members of a loving husband and father realize on May 22, 1968, was that this disturbing scene would trigger fifty-one years of wrongful doings in Suffolk County, New York. What was missing from that car was one of the most innovative purveyors and revolutionaries of the food service industry in New York City—a man named Sam Sommer.

His story is chronicled in the new book, Railroaded: Framed for Murder, Fighting for Justice (WildBlue Press, Jossart, Sommer, 2019). Sommer looked to Wisconsin author and public relations professional Christopher Jossart to tell his story—one that has been corroborated as the longest-running fight for exoneration on record in America. It is also a covered up hate crime before the term was coined by in the 1980s by journalists.

“The way the national media portray hate crimes in the United States is not close to what this giving man and American-dream builder for immigrants went through,” noted Jossart. “After living inside a hate crime resulting from three years of research, it’s noteworthy to point out that this hate crime left a victim completely silenced, period. The criminals then took advantage of the crime for further gain.”

In 1968, Sommer was a thirty-one-year-old, self-made entrepreneur from the South Bronx who spent his high school days delivering meat and dairy products in between playing baseball. His youthful drive for business found him dropping out of high school and working around the clock. Only a strong Jewish faith held him back from working every day of the week.

Sommer’s family epitomized a transforming blue-collar Big Apple in the 1950s—one predicated on sixteen-hour work days, a late meal, and hitting the pillow. His father worked tirelessly as a laborer in a booming garment industry amidst a wave of cultural growing pains. Before age twenty, Sommer turned down a longshot at playing professional baseball for learning the streets of commerce.

His lower-class, loving upbringing motivated Sommer to buy into a wholesale meat business. He married Elaine Rosen, a quiet, focused younger gal of one year than Sam. She grew up across the tracks in a growing middle-class neighborhood, and the two created a little venture from a small one-bedroom apartment in New York City. Sommer needed to work off his loan, which was provided with help from Elaine’s father—a garment business owner, so money was tight for a while for the couple. While toiling two jobs, Sommer developed an exceptional flare for also working the streets, where he mastered the art of building relationships.

Made for handshakes indicative of those times, Sam Sommer grew his connections in the Big City during the late ‘50s and early ‘60s. Shaped for success from his teen days working as an apprentice with a sharp eye for detail and solid networking skills, his own kosher meat business seesawed on the brink of exploding. Most of his competition focused on the inner hub of metropolitan New York, but the now-seasoned businessman in just his twenties envisioned room for expansion on Long Island.

Jossart said Sommer’s early years portrayed a Norman Rockwell-style portrait of making a go of it in America. “Sam gave immigrants a shot at life while pioneering food service,” he added. “He opened Long Island’s first delicatessen and emerged as a resource for other aspiring entrepreneurs.”

Rosen’s Deli in Commack, located across the street from today’s still-standing Mayfair Shopping Center, used to line up customers fifty-deep outside excited to indulge in pastrami piled to the ceiling. Among the regular clients were judges, lawyers, blue collar workers, and so on. “We would often serve more than a hundred a day for lunch alone,” Sommer reminisced recently with cane in hand.

Now eighty-two and feeble from years of physical hardship, the aged Sommer is smarter than ever when it comes to life lessons and knowing criminal law—something he studied feverishly in prison. In 1968, he was kidnapped from his car in a Dunkin’ Donuts parking lot, beaten by Suffolk County detectives, and shaken into a false confession for the murder of his business partner and relative, Irving Silver. “One day I was catering to new markets in education and health care, and the next day my life and family’s future changed forever,” he added.

Sommer spent twenty-one years in prison despite winning an arraignment-related appeal regarding the method in which he was arrested and a pile of reasonable doubt. His trial judge set precedence on a jury, sealing his fate. While in prison, he mentored other inmates against the chagrin of control-hungry guards who believed in segregation practices.

While moving from prison to prison for good behavior as punishment from the system, his wife and kids lived in the backs seats of cars and in treehouses to survive and be near him. All of their possessions in Commack were stripped and taken over by members of the mob. In a twist of irony, a convicted felon working as an informant for Suffolk County police and one who repaid Silver on a cash loan with a bounced check was never investigated for the murder. Silver’s body was found in a ditch on Long Island two days after he went to the police about the bounced check.

“People will think this is fiction because of the unbelievable level of injustice one man has endured,” said Jossart. “Sadly, Mr. Sommer’s plight represents the first of decades’ worth of corruption and cover ups in Suffolk County. To this day, for example, Mr. Sommer is still waiting to see a court-ordered copy of the Autopsy Report concerning the deceased, Mr. Silver. Legal experts suggest this a contempt of court matter now against Suffolk County some 18,000-plus days later.”

One of the “obvious” elements to this case, according to Jossart, was the discovery of a dismissed Grand Jury Indictment signed by a detective involved in Sommer’s kidnapping. Sommer didn’t find the eerie document until 2015. Through the Freedom of Information Act, he was finally granted permission to view his caseload paperwork in the police archives in Yaphank. It was there he fell to his knees after finding a Supplementary Report with the aforementioned grand jury information on it.

The paperwork was “filed” a month after Sommer went to prison in 1971, conveniently covered up for forty-four years in a basement. That discovery is currently being used as leverage today in remaining appellate pathways to once and for all lift the heavy burden of injustice off his shoulders. “This is a true hate crime,” noted Jossart. “My wife and I have felt the tears and heard the rumblings of cries from family members. Your spine freezes when you learn of the evil that people in positions of power have casted against this caring soul.”

Railroaded presents a plethora of twists and turns surrounding the case, along with individuals who knew of Sommer’s innocence while he was in prison—some still alive today hiding in drawn shades of shame. In addition, even a federal magistrate judge to this day believes Sommer was innocent of the crime. He once prepared Mr. Sommer for his parole hearing and subsequent case appeal in the mid-90s as a General Counsel to New York Lawyers for the Public Interest.

“I know my name is posted to a decaying note on the wall in the Suffolk County DA office,” said Sommer. “I should have never stood trial in the first place. I just want my family to live their lives without pain and injustice hovering over them.”

The book, dedicated to Sam’s late wife, Elaine, for her resiliency, is available through several national retail outlets or by visiting wildbluepress.com.

Listen HERE on the latest about the wrongful murder conviction from a major voice on New York radio!

Railroaded: Framed for Murder, Fighting for Justice is due out March 26.